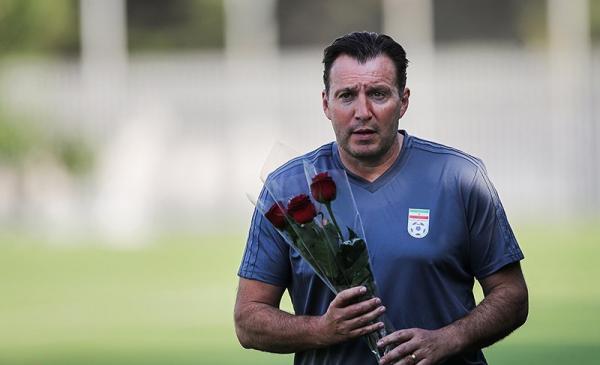 The former was named as new head coach of Iran national football team in May.

The former Belgium and Ivory Coast coach, who replaced Carlos Queiroz in Team Melli, wants to make a surprise with the Iranian football team.

"There is a lot of talent here. I have a goalkeeper in my team who could play at any top club in Europe. I also let an 18-year-old attacker to make his debut. He had already scored twice against Germany in the 2017 FIFA U17 World Cup. In the match against Syria, Allahyar Sayyadmanesh came off the bench and immediately scored a goal. And I am convinced that there are so many talents and we must find them. As a national coach, I like to look for the different ingredients to make a delicious soup," Wilmots said in an interview with Sporza.be.

"And the question remains: How we want to play? Of course, you can't change everything in three training sessions, but in the friendly match against South Korea we created 16 scoring chances. Iran were not afraid of playing attacking football. The younger players need to adopt the new philosophy," he said.

The Belgian coach believes that the ambition with Iran is not the same as before with Belgium.

"With the Red Devils I always thought we were going to win that tournament. Now, that is different. But you can also surprise with Iran. Iran have not advanced to a World Cup knockout stage so far and it will be a good challenge for me," he added.


“I love discovering new countries. I am curious. I was already working in Europe and Africa and now I am getting to know Asia. I have been in Tehran since coaching the team and what I noticed that everything is very clean. You see flowers everywhere. I think it's a European city, it's really formidable. And our training center is a magical place, with the mountains in the background," the Belgian coach went on to say.

"I don't want to make any comment on politics, because I am here for sports. But I have noticed that Iran is a safe country. It’s safe here, perhaps your life might be safer in Iran than Europe. Everything is clear here,” Wilmots concluded.