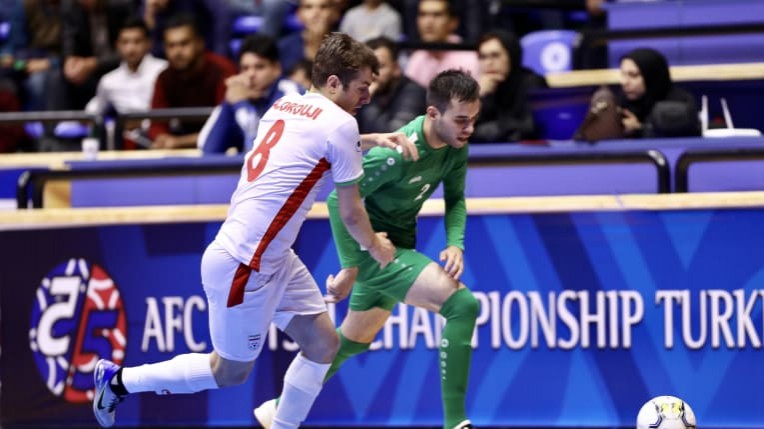 AFC - 12-time champions Islamic Republic of Iran got their AFC Futsal Championship title defence off to a winning start, earning a 4-0 win over Turkmenistan in the opening Central and South Zone Group B Qualifier at Ghadir Hall on Wednesday.

Three Iranian players got on the scoresheet in addition to an own goal from Turkmenistan’s Gurbangeldi Sahedov as the home crowd was treated to a commanding display from the team ranked five in the world.

The result puts Iran of the verge of qualifying for next year’s Finals with two games remaining in the group.

Asia’s most successful futsal nation’s bid to qualify began with a meeting against next year’s tournament’s hosts, with Turkmenistan eager to put in a strong showing under Croatian head coach Robert Grdovic.

But while Turkmenistan will welcome the Continent’s best for next year’s Finals, they were the visitors in Urmiya and Team Melli made the most of home advantage when captain Ali Ashgar Hassanzadeh gave them the lead in just the third minute.

Saves from Berdimyrat Sapardurdyyev denied Behzad Azimi Yancheshmeh and Saeid Ahmad Abbasi from extending their lead, but the second goal did come before half-time, with Mahdi Jabid’s powerful left foot effort putting the hosts two clear in the 18th minute.

Turkmenistan fought on, but they inflicted the next Iranian goal on themselves when Gurbangeldi Sahedov deflected the ball into his own net after Taha Nematian’s initial effort thundered into the woodwork, and a close range effort from Mahdi Karmi made it 4-0 as the holders took the first step to retaining their Asian title.

Turkmenistan must now bounce back with a win Kyrgyz Republic at the same venue on Thursday, while Iran have a night off before returning to action, also against Kyrgyz Republic, when Group B concludes on Friday.

The top two teams from Groups A and B will qualify for Turkmenistan 2020 from the Central and South Zone Qualifiers. However, should Turkmenistan - who are in Group B - occupy one of the top two positions, the best third-placed team from either group will qualify.