AFC - Omar Al Soma’s stoppage-time equaliser saw Syria book a date with either Australia or Saudi Arabia in the FIFA World Cup Russia 2018 continental play-offs as a 2-2 draw with Group A winners Islamic Republic of Iran at Azadi Stadium on Tuesday secured third place in the standings.

Needing a win to have any chance of automatic qualification, Syria breached the Iranian defence for the first time in the campaign when, 13 minutes in, Tamer Haj Mohamad finished from eight yards after goalkeeper Alireza Beiranvand could only parry out Al Soma’s free-kick from distance.

The hosts levelled on 45 minutes after Mehdi Taremi’s header from Ashkan Dejagah’s corner was tipped onto the bar by Ibrahim Almeh, only for Sardar Azmoun to bundle home from close in. Taremi then missed a golden opportunity to put Iran in front when he hit the side netting from two yards out in frantic end to the half.

Carlos Queiroz’s side came close once more as the hour approached when substitute Rouzbeh Cheshmi headed against the woodwork from another Dejagah corner, before Azmoun did add a second on 64 minutes by finishing from six yards after a Taremi flick-on.

The visitors pushed for an equaliser and three minutes into injury time Al Soma secured a fairytale comeback to the national side when he struck through Beiranvand’s legs after being played in by Mardik Mardikian to spark jubilant celebrations among the Syrian bench.

The draw, coupled with the scoreless stalemate between Uzbekistan and Korea Republic, saw the Koreans secure second place in Group A and automatic qualification as Syria claimed a play-off berth and the Uzbeks missed out. 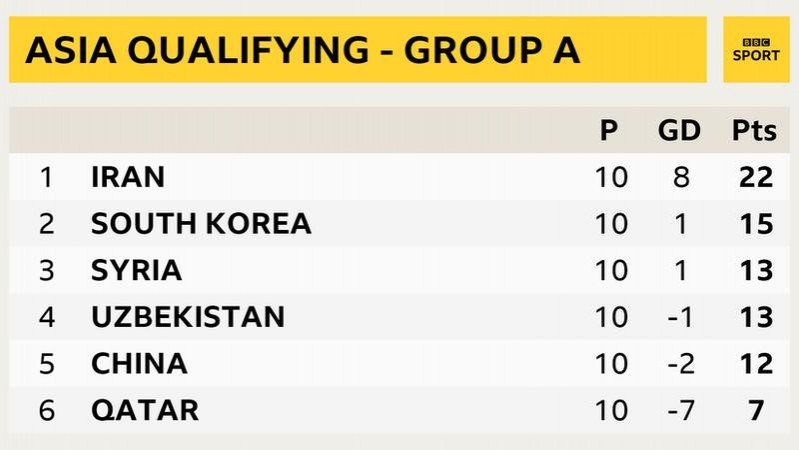