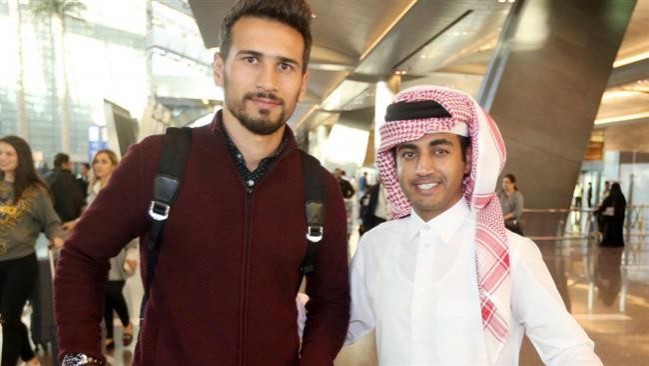 PTV - Iranian footballer Sajjad Shahbazzadeh, who officially terminated his contract with Esteghlal Tehran that plays in the Iranian Persian Gulf Pro League just days ago, has been linked with a move to Qatar Sports Club, which competes in the Qatar Stars League.

Shahbazzadeh arrived at Hamad International Airport in the Qatari capital city of Doha on Wednesday morning, and was welcomed by officials from the Qatari sports club upon arrival.

Shahbazzadeh made a name for himself in Saipa Football Club, before joining Esteghlal in summer 2014.

He scored 24 goals in 62 appearances for the Blues in all competitions.

On July 22, 2016, Shahbazzadeh joined Turkish club Alanyaspor, but terminated his contract with mutual consent after just six month due to not receiving adequate playing time.

After that, he sought to return to Esteghlal, but since the Blues had been banned from signing players in the winter transfer window, Shahbazzadeh joined Naft Novin Tehran Football Club.

Shahbazzadeh returned to Esteghlal from Naft Tehran on June 14 last year. He officially parted company with Esteghlal on January 14.