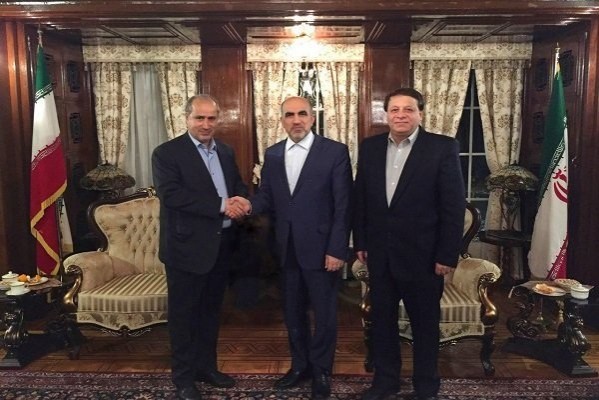 MNA - Ambassador of the Islamic Republic of Iran to the Netherlands Alireza Jahangiri pointed to signing a cooperation agreement between the federations of the two countries last year and said, “this agreement is the outset of broadening and expanding sports cooperation between Iran and the Netherlands.”

Given the above issue, Mehdi Taj and Mohammad-Reza Saket president and secretary general of Football Federation of Islamic Republic of Iran respectively visited Iranian Ambassador to the Netherlands on the sidelines of FIFA meeting and conferred with regard to the various projects in the field of soccer.

For his part, Jahangiri reiterated, “Football Federation of the Netherlands has expressed its readiness to cooperate with Iran in various fields.”

The Netherlands enjoys high potential and capability in the field of training basic football teams, he said and called for Iran to take advantage of high experience of the Netherlands in this respect.”

In conclusion, Jahangiri referred to the history of national football teams of Iran and the Netherlands in 1978 World Cup in Argentina and said, “Embassy of the Islamic Republic of Iran to the Netherlands is ready to pave suitable ways for Iranian Football Federation to design and implement a joint program including friendly match between national football teams of the two countries for preparing in 2018 World Cup in Russia.”