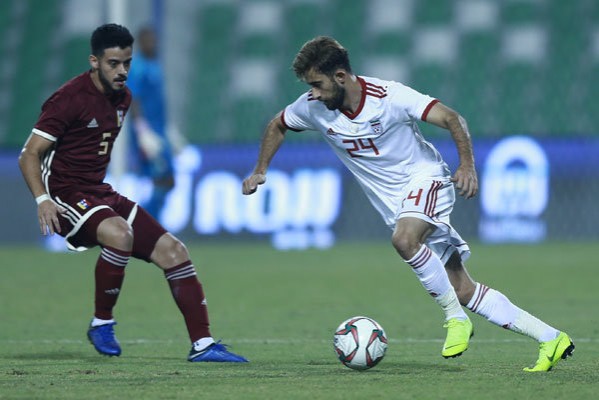 Tehran Times - Iran national football team were held to a 1-1 draw by Venezuela in a friendly match on Tuesday.

In the match held in Doha, Qatar, Udinese striker Darwin Daniel Machis found the back of Iran’s net in the 35th net.

He blasted a right-footed shot into the goal from the edge of the six-yard box.

Seven minutes later, Charleroi striker Ali Gholizadeh equalized the match, dribbling past the Venezuelan defender and opened the goal with a shot from outside the area.

In the 53rd minute, the referee awarded Iran a penalty but he was alerted to check the replay by VAR, and after reviewing the incident on a screen off the edge of the pitch, overturned his decision.

In 64th minute, Venezuela’s goal was ruled out for offside.

Iran had defeated Venezuela 1-0 at the Goffertstadion in Nijmegen in the Netherlands in last year’s November.

Team Melli are preparing for the 2019 AFC Asian Cup, where they are pitted against Iraq, Yemen and Vietnam in Group D of the competition.

Team Melli will travel to Doha on Dec. 10 and will hold a 23-day training camp until Jan. 2.