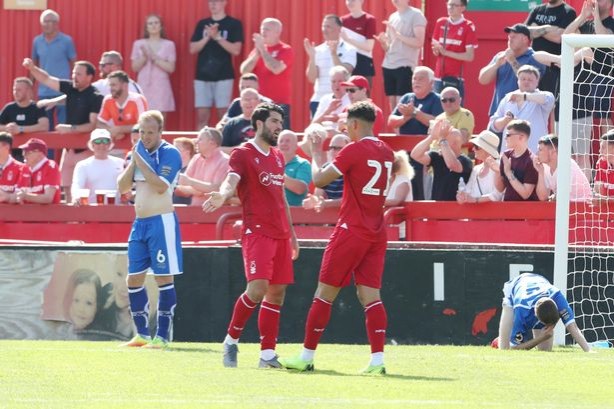 Westbridgfordwire - Nottingham Forest kicked off pre-season with a 2-1 victory against Alfreton Town at the Impact Arena on Saturday afternoon.

Goals in each half by Brennan Johnson and Karim Ansarifard ensured a positive start to their preparations for the new season, with new head coach Sabri Lamouchi watching on from the stands.

Played in sweltering heat, there was an expectedly slow tempo to the game to begin with as both sides tried to find their rhythm.

The first chance of the game fell to Forest on 10 minutes as Arvin Appiah’s low cross was steered towards the far post by Lewis Grabban, but the frontman was denied by a fine saw low down by keeper Tom Nicholson.

The opening goal, however, was gifted to Alfreton on 16 minutes as Dec Bacon capitalised on a lapse in concentration by Joe Worrall at the back, with the forward calmly slotting past Costel Pantilimon.

The Reds were dominating possession and were able to get down the sides of the Town defence but their rearguard held firm before a drinks break halfway through the opening period.

Refuelled, Forest stepped it up a gear with Grabban again denied by Nicholson following a fine pass by Joao Carvalho and on 39 minutes they were level through the impressive Brennan Johnson.

Some neat play on the edge of the box saw Grabban clip it in the air for Joe Lolley who knocked the ball down for Johnson to finish first time into the far corner.

Grabban could have put Forest ahead just before half-time, latching onto Lolley’s through ball but he couldn’t beat Nicholson.

All square at the break and all change for Forest, with a whole new team taking to the field including new signing Sammy Ameobi.

Ameobi was at the heart of things for The Reds, driving forward and getting in some dangerous crosses. Matty Cash headed wide and Ben Osborn saw a free kick saved as Forest went in search of the winner.

It came on 83 minutes as Ameobi ran with the ball to the byline and pulled it back for Karim Ansarifard to convert from close range and seal an opening pre-season win.