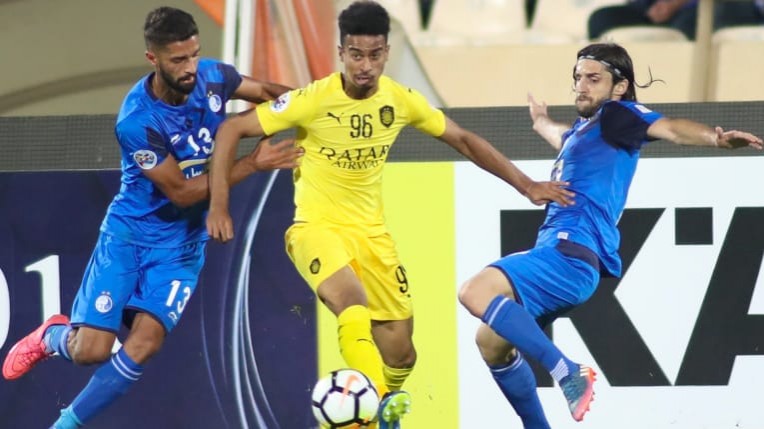 AFC - Qatar's Al Sadd took a big step towards the semi-finals of the 2018 AFC Champions League after Baghdad Bounedjah's brace secured them a 3-1 comeback win over Islamic Republic of Iran's Esteghlal in the first leg of the quarter-finals on Monday.

The 2011 champions began the game brightly but were dealt a blow in the 12th minute, conceding after an unfortunate mistake.

A high ball into the Al Sadd box was headed down by Boualem Khoukhi for his keeper Meshaal Aissa to pick up, but the young custodian inadvertently let it slip past him to gift the hosts an opener.

Esteghlal maintained their lead right up to halftime, after surviving a scare in injury time when Akram Afif's shot rebounded off the post to be gathered by Esteghlal keeper Mehdi Rahmati.

In the second half, Al Sadd came out of the tunnel looking for a way back into the game and were rewarded for their attacking intent with a goal at the hour mark following a well-worked move. After a fine one-two with Bounedjah, Afif beat his marker and finished past Rahmati to level the score.

Five minutes later, Bounedjah latched onto Xavi's flicked through ball, made his way into the box, turned Mohammad Daneshgar inside out before slotting home Al Sadd's second goal.

Bounedjah then made it 3-1 for the Qataris in the 74th minute after winning and then converting the penalty, following a foul on him by Vouria Ghafouri.

Al Sadd will now take home a valuable advantage ahead of the return leg in Doha on September 17.

Penalty kick was not Penalty at all.